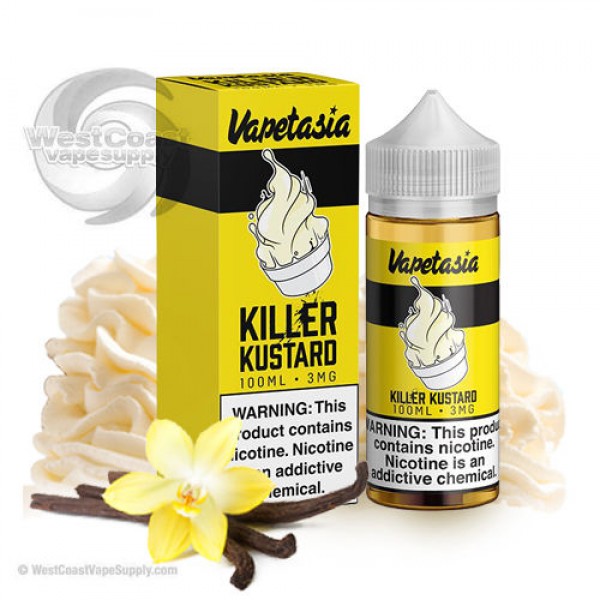 Killer Kustard by Vapetasia 100mlKiller Kustard Vape Juice ReviewWhen it comes to rich, creamy Vanilla Custard e-liquids, you will be searching for a ..

When it comes to rich, creamy Vanilla Custard e-liquids, you will be searching for a lifetime to match the award-winning flavor of Killer Kustard by Vapetasia. As one of the smoothest, purest Vanilla Custards on the planet, each hit will have you instantly coming back for more. Killer Kustard isn’t just an e-liquid that you put in your tank, and it’s a legitimate lifestyle choice. Killer Kustard by Vapetasia is a tried and tested all-day-vape that is sold in every corner of the United States and has reached out around the globe. Some people may describe this as a solid Vanilla Custard, but the reality is much more complex.

The inhale of Killer Kustard by Vapetasia is an instant flavor explosion as it delivers a robust, creamy flavor that has been described as a time machine back to childhood. Your taste buds will be stimulated, awakened by sweet vanilla and the sumptuous flavor of rich egg custard. On the exhale, Killer Kustard is not a flavor that hangs around and instantly leaves you reaching for your mod. Vapetasia has achieved the perfect balance of sweet and savory, with just a faint hint of nostalgia.

From your first hit to the last drop in the bottle, the flavor remains the same. Hit after hit of intense flavor will have you trying to decide if the next bottle should be more of the same or if one of the other Kustards is next on your hit list. Killer Kustard comes in 100ml Chubby Bottles for quick and easy refilling, designed to never break your heart by smashing to pieces on the concrete. With a ratio of 70% Vegetable Glycerin (VG) and 30% Propylene Glycol (PG), Vapetasia has created a blend with Killer Kustard that delivers thick, dense clouds without sacrificing the solid flavor they intended. Available in nicotine strengths from 6mg all the way down to 0, there is a Killer Kustard option for everyone.

When it comes to recognizable e-liquid brands, Vapetasia is a fan favorite and staple around the globe. From the launch of the company, they have come a long way, and the story behind them tells itself. Self-professed vaping enthusiasts operating out of Las Vegas, Nevada that has been creating killer flavors since 2013. Some people believe they were an overnight success but, it took a lot of blood, sweat, and tears to get to the top of their game. It appears that every e-liquid they brought to the market became an instant success, up to and including the salt-based e-liquids they have produced. From the Killer Kustard line forward, this company has created hit after hit, quickly working their way from a novelty to an instant all-day-vape audience. Most people you speak to will have a Vapetasia product somewhere in their regular rotation, quite a few won’t vape anything else. In all honesty, Vapetasia products haven’t produced a fan-base, it’s more like a cult following.

Simplicity has been the key to Vapetasia’s success. While other companies have been chasing down intricate flavor profiles that catch the customer's attention -- leaving them wondering how that mixture of 18 different fruits and pastries will taste- Vapetasia got down and dirty with the kinds of flavors that everyone loves. Not only did they keep it simple, but they also nailed the flavors every single time.

Simple, yet intricate, tobacco flavors, delicious parfaits, and lemonades to die for are part of what Vapetasia is known for, but those Kustards are their bread and butter. Taking a simple concept and adding Strawberry, Lemon, and Honeydew was a risk, but it was one that paid off tremendously. You will be hard-pressed to find a vaper in the United States that hasn’t tried at least one of these e-liquids – they are that good. Vapetasia is a company that was singled out by Congress and rather than running for the hills they bent over backward to ensure that they would be able to keep the products that their customers love available in the marketplace. There are very few companies that cared this much about their customer base, and Vapetasia continues to be rewarded for it.

Here at West Coast Vape Supply, we are proud to be able to offer you Vapetasia e-liquids, especially the Killer Kustard line, and we have an outstanding selection to offer. With the Vapetasia brand, there is no such thing as a wrong choice. Killer Kustard is one of the greatest flavors on the market, and we have it right here at an extremely competitive price, probably lowest you will find on the web.

Made in California USA 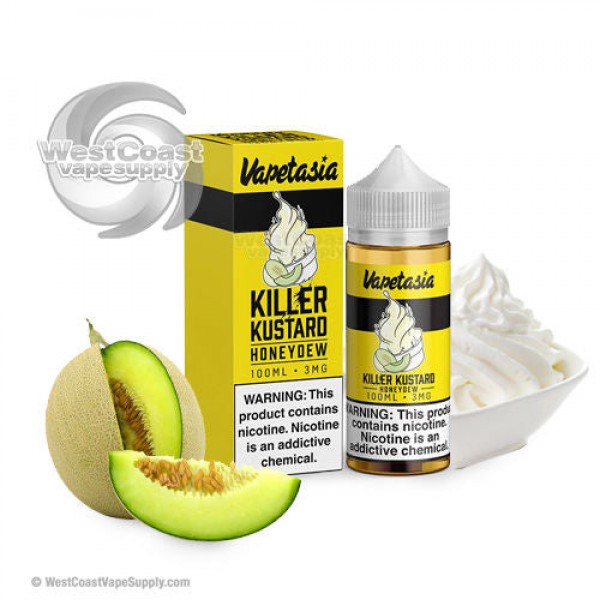 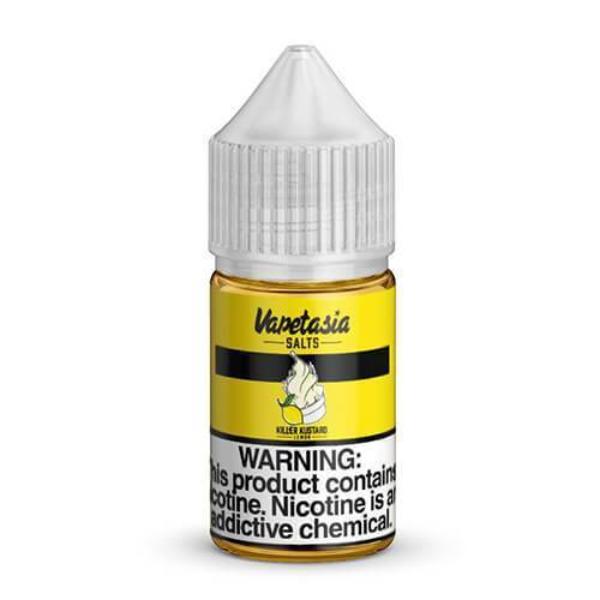